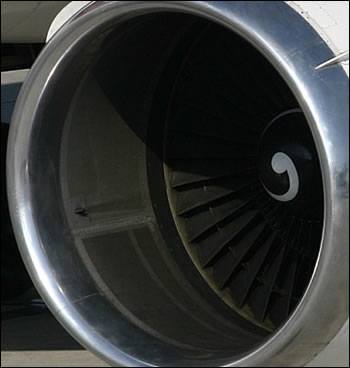 The effect of Foreign Object Debris (FOD) on maintenance costs can be significant. For example, the cost to repair an FOD-damaged engine can easily exceed $1 million. FOD incidents costs the U.S. Military over $ 90 million per year. FOD can also incur extensive indirect costs, including:

The cost of repairing FOD damage can easily exceed 20% of its original purchase price.

*Fan blades are balanced and replaced as a set. 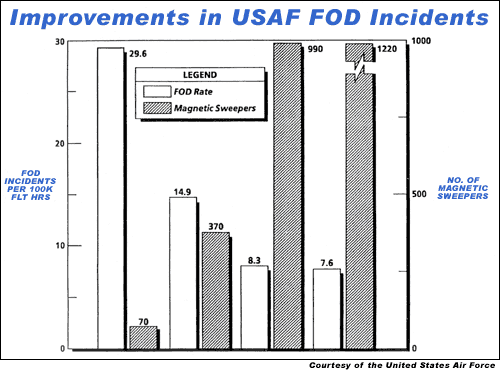 As seen on the chart at right, using data compiled by the United States Air Force, incidents from “FOD” or “Foreign Object Debris” inversely decline nearly 1000% when using magnetic sweepers/FOD magnets along flightlines and aircraft traffic areas. This chart shows the ratio of FOD incidents per 100k flight hours.

Recently Southwest Airlines’ Houston station spent approximately $7000 for tire repair costs. More significant was the time ramp equipment was out of service. As you know, keeping equipment in serviceable condition is essential to running an efficient operation.

Southwest’s Ground Equipment Maintenance Foreman decided to try Shields Magnetics FOD Magnets and their product line, including the magnetic ramp sweeper. The FOD Magnet is designed to pick up metallic FOD in order to prevent ingestion in aircraft engines and to prevent tire damage to ramp equipment. Initially Southwest purchased three Magnetic Ramp Sweepers/FOD Magnets. These immediately proved very effective. They followed up with an order to equip each of their bag tugs with a FOD Magnet Magnetic Sweeper. The result has been that tires repairs have been significantly reduced, from somewhere in the vicinity of 15 flat tires a week down to two or three.